Breakup of Yugoslavia, Crime without punishment, Crimes against Serbs, History and News 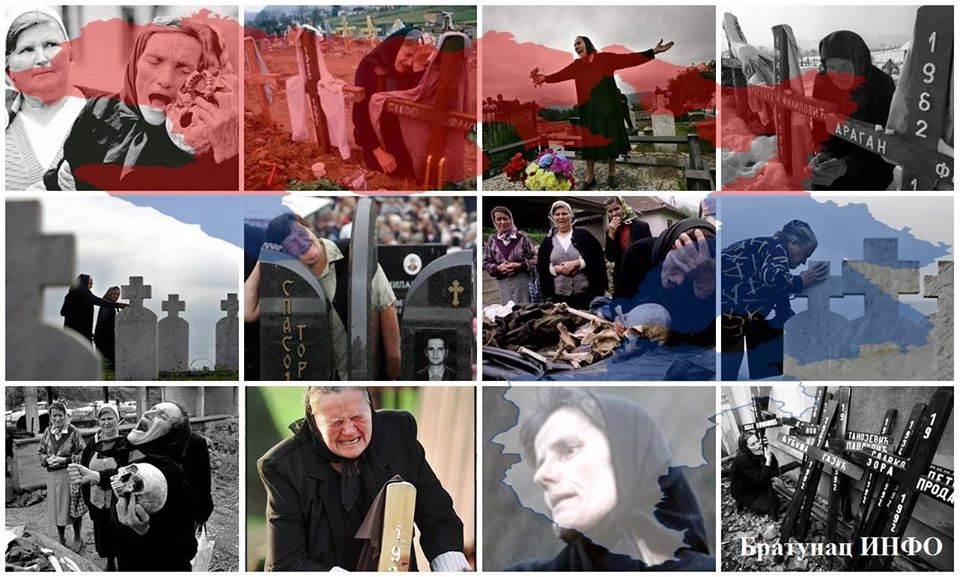 No one has ever been held accountable for that GENOCIDE against Serbs.

Sikirić, Podravanje, Kravica, Skelani, Zalazje, Bjelovac, Fakovići, Ratkovići… villages in the vicinity of Srebrenica where Serbs lived. Even after the Second World War, when the Srebrenica District was cleansed of Serbs. At that time, 6469 Serbs were killed in that area. 21 execution sites were recorded, of which eighteen were never marked.

No one has ever been held accountable for that GENOCIDE against Serbs.

The word genocide is often used when it comes to Serbs! But not as genocide against Serbs, but as genocide against other nations by Serbs. Serbs were declared a “genocidal people / nation”. Taking into account all the circumstances and ways of war, genocide is a word that means the extermination of one nation. Throughout their existence, Serbs have never exterminated any people, but others have too often tried to exterminate both Serbs and their way of life, the Orthodox faith .

Many Serbs have been indicted or charged with “genocide in Srebrenica” before the Hague tribunal. However, the one for whom there is evidence of the GENOCIDE AGAINST SERBS, the commander of the Bosnian Muslim forces, Naser Orić, was acquitted !!!

In September 1990, the Party of Democratic Action-SDA was formed in Bratunac. At the same time, armed paramilitaries “Green Berets” are starting to walk the streets throughout Bosnia and Herzegovina. What do these people with “lilies” on their uniforms mean to Serbs ?! Fear, awakened memory, death. This will be especially the case in the middle Podrinje.

Already in the ’90s. Eleven Serbian miners were killed in a bauxite mine in Milići. But the biggest crimes against Serbs, the most brutal, the most cruel, will happen during ’92, ’93, ’94 and ’95. years.

Silenced for years, Serbs should have been ashamed of the ALLEGED GENOCIDE in Srebrenica. Genocide happened, but against Serbs in and from the surrounding villages around Srebrenica. It would be impossible to list all the crimes, all the criminals, and this will be just a short text about what the people from those villages experienced. As a rule, the attacks would take place in the early morning hours, in the villages, the night before, surrounded by Muslim forces, and almost always on major Orthodox holidays. The goal of killing and exterminating Serbs was the same as in the Second World War “The Drina is the border”! With that thought and hatred towards the Serbian people, always gathered, the criminals did not choose the victims. NO! They were no’t soldiers or the army of the then JNA! They were children, women, the elderly, men who did not take up arms, nor did they want to take part in the war. But the war “found them”!

Many testified that after several incursions by these units, they no longer wanted to be captured alive, that it was better for them to kill themselves. Because either they would end up in camps, even children, or a cruel death followed, usually with a cold weapon! Slaughter, crucifixion on a tree such as the crucifixion of Christ, tied hands with wire, beheading, rape to death, beatings to death, burning of the living, taking children out of the wombs of pregnant women…. Is that for Serbs was it ALREADY KNOWN ?!?

One of the horrific, inhuman, monstrous crimes took place on July 27, 1992 in the village of Donja Oyster. Namely, a 12-year-old boy, Slobodan Stojanović, returned to pick up his dog. Unfortunately, he came across the Albanian monster Elfeta Vesela, whom, according to the witness, Orić adored. She did not “only” kill Slobodan in front of others, even Orić himself, but cut off both his hands, ear, toes. Elfeta performed the torture of Slobodan Stojanović with the verses “Šote mori šote”. Should we be silent about the cruelty of this crime, or should we mention it loudly in the name of Slobodan Stojanovic ?! In the name of all those Serbian victims whose corpses were collected in order to be buried with dignity, in the name of those mothers and women who searched for their loved ones for years, only to bury a few bones, or just the head, or a headless body.

The few survivors from those villages recount how horrible the end of the bloody feast was, when, after all, women would rob everything left behind of those killed with a commotion and howls. Cattle, food, and when they were done, they burned to the foundations of the village. But they failed to “burn the truth”!

The “justification” for these robberies was the alleged famine of the Muslim population. Yes, they were probably hungry, because Orić controlled the convoys of UN help! There was everything from flour to weapons on the “black market”. The UN observers themselves knew all this, but they could not “stand in the way” of Orić, nor did they manage to make Srebrenica a truly demilitarized zone without weapons. The Muslims themselves admitted that the weapons were never handed over. Why would?! On the one hand, they were afraid of the very top of BiH, which was still in ’93. According to Police Chief Hakija Meholjic, he proposed “sacrificing 5,000” Muslims from Srebrenica! On the other hand, according to intelligence According to data from that time, the shooting of Muslim prisoners was organized by the French intelligence service.

Behind the scenes, another war was being waged against the Serbs, the media war, in which Muslim crimes were attributed to Serbs. But this is what it looked like from the point of view of those who knew it, and whose voice was not heard until the revelation of the strictly guarded military secret of the British government.

After these facts and evidence, we can now deal with some numbers and dates that have been brilliantly manipulated over the years. Take for example the first memorial plaque in Potočari I number 8372…

When we list these places, the first question is what does Srebrenica itself have to do with the number listed on the board itself. Especially if we know that the number of killed and missing according to the official list of BiH is 7400 ?!

Let’s take the memorial plaque in Kravica for the next example, where the names of the killed Serbs from THAT PLACE and other places in Podrinje are engraved, whose graves are with those names and surnames! 3267 of them!

Or if we take the data of some of the great fighters for the truth about Srebrenica, such as Milivoje Ivanišević, Aleksandar Dorin, who used the documents of the Muslim side to prove fraud. Thus, in one of the many interviews, Aleksandar Dorin shows the original document of the Muslim side, where the witnesses were examined on August 10, 1995. years recounted the events of the entry of the VRS, but WITHOUT FIGHTING, WITHOUT KILLING, WITHOUT SHOOTING!

As two more facts and one great illogicality can be taken into account. The first is the fact that Naser Orić left Srebrenica in March ’95 and that the Muslims had about 6,000 fighters and as many people under arms. How did about 60 RS soldiers enter Srebrenica without all of them offering any resistance ?! Why did they go to Tuzla at all, leaving behind women, children and the elderly in Srebrenica ?!

And we could write a lot more about the illogicalities themselves, taking the example of the Hague Tribunal itself, which uses the figure of 4790 killed at the trial of Zdravko Tolimir. And to write about Serbs with names, surnames and graves, first of all, but that would be justification again. Before whom and why do we have to justify ourselves ?!

So let’s not remember Srebrenica only on July 11th! Let’s always talk about the suffering of Serbs, let’s be proud of them and their sacrifice, let’s praise them, because that is the least we can do for them, for our people, for our generations! AND LET’S NEVER FORGET CRIMES AGAIN so that they don’t happen to us again!

Published in Breakup of Yugoslavia, Crime without punishment, Crimes against Serbs, History and News