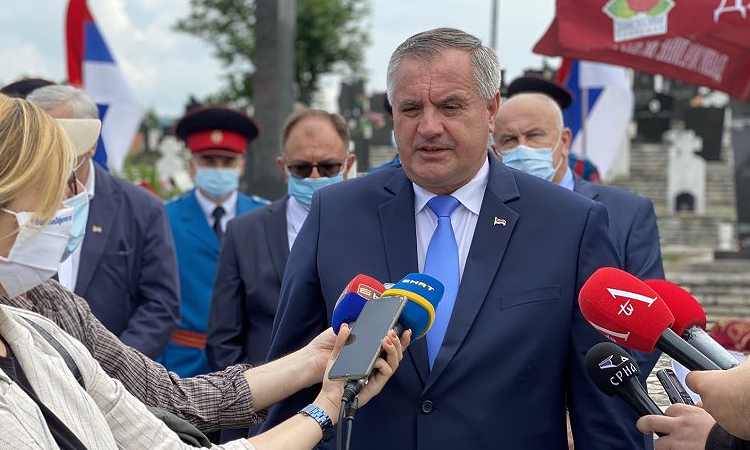 VIŠKOVIĆ: MONSTROUS AND BRUTAL KILLING OF CHILDREN IN PODRINJE

The Prime Minister of the Republika Srpska Radovan Višković pointed out in Bratunac today that the Serb people in the Podrinje area have suffered in the most cruel way in the last defense-patriotic war on the biggest Serb holidays – Christmas, Saint Peter’s Day, Saint Nicholas’ Day, Saint George’s Day, Saint Vidus Day, Orthodox New Year.

“2,652 Serbs had been killed in the area of Srebrenica, Zvornik, Skelan, Milići, Bratunac, Vlasenica and Osmaci during the defense-patriotic war, while around 3,500 Serbs were killed in the wider areas of Middle Podrinje and Birač and 5,400 families lost their property and real estate”, Višković emphasized.

He has said that, unfortunately, in the history of the Serb people, there are a lot of suffering and sad events, and the war is the worst thing that can be experienced, and only worse than that is when children are killed in a planned and cruel way in war.

“Unfortunately, it was happening to us. 43 children were killed in the most brutal way. The brutal murder of 12-year-old boy Slobodan Stojanović is one of the most monstrous crimes committed in the last war in BiH. A boy who returned home to get a dog was cruelly tortured and browbeat, and then killed. His stomach was cut in the shape of a cross, his ear was cut off and he was shot in the head from close range”, Višković emphasized.

The Prime Minister also reminded of the death of brothers Aleksandar and Radisav Dimitrijević from Skelani. They were five and 11 years old at the time, and were killed in their mother’s arms by a sniper rifles.

“The shooter saw that they were minor children. And no one has been arrested or suspected of killing the Dimitrijevic brothers”, Višković said in an address to guests marking the suffering of 3,265 Serbs from the middle Podrinje who were killed by Muslim forces in the past war, including Serbs killed on Saint Peter’s Day 28 years ago in the villages around Srebrenica and Bratunac.

Višković pointed out that every lost life is a tragedy, especially the life of a child.

“The Serb people suffered the greatest losses in this area and in the Great War, then in the Second World War and this last defense-patriotic war. We should express our gratitude with dignity and repay all those who died innocently on all battlefields and execution sites so that today we can live in peace and freedom in the Republika Srpska”, the Prime Minister emphasized.

He said that the leadership of the Republika Srpska will not allow that the truth about the “bloody” events and suffering of the Serb people to fall into oblivion and that nobody was held accountable for those crimes committed against Serbs and Serb`s children.

“There are more and more people in the world who objectively look at the facts which confirm that a civil war was waged in which members of all nations were killed. The families of Serb victims rightly expect that all those who committed crimes will be brought to justice”, Višković said.

He emphasized that the Government of the Republika Srpska stands behind every family, soldier, war invalid, strives to help everyone, and primarily to the families who gave their dearest and most valuable things for the freedom of the Serb people and for the Republika Srpska.

“We will work together to improve living conditions in Srpska. We will persevere in the legal struggle and we will not give up the obligation and responsibility to do everything to make the truth about our victims available to the domestic and international public. We will do that for the future of Republika Srpska and our children. We will do this for the future of the Republika Srpska and our children, which we must teach the truth and the belief that evil must not take over people”, Višković said.

He said that the goal of the Republika Srpska is to be a part of the civilized world, dedicated to peace, development and coexistence with all other peoples living in this area.

“It is Christian to forgive, but we must not forget”, concluded the Prime Minister of the Republika Srpska.

The comments provided are the private opinions of the authors and do not support the views of the Association “Serbian Ramonda”. Comments on inappropriate content will be deleted without notice.

Published in Crimes against Serbs and News